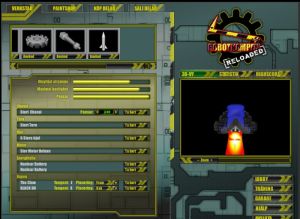 From raketspel.se: Purpose of game: Promoting the TV-show "Robot wars" in Sweden Miscellaneous: Produced in Shockwave. The game is approx 1,5 mb. Can be played via modem, but broadband is recommended. Around 600 000 robots have been created by the players and peaked at over 4000 concurrent players. The sales of Robot weapons was a big success. The game has a spectator function and you can view other fights live as well as broadcast them on digital TV.

Notable differences from the English version.

1. The language was set to Swedish, this included the logo and in-game texts. Some parts had different English name as seen in the picture attached.

2. The most notable difference is that before the Reloaded update, the Swedish game had a different map that was based on Robot Wars arena. This map featured house robots that was based on the house robots from Robot Wars. Sir Killalot would do a lot of damage if the player ran into him in his corner, SGT Bash would spew a flame towards them if they got too close to his corner and Matilda would send her tusks out like a piston and fling them across the arena. It also featured a pit and when a robot lost by taking too much damage Sir Killalot would leave his corner and guide the loosing robot into the pit.

3. The loading screen for the Swedish version after the Reloaded update features a Mini-Bot view of a robot with Heat-Seeking Missiles and a Mini-Gun near the pit on the Roof of Destruction map.

4. The locations displayed in the lobby is replaced with cities of Sweden.